This is November and that means National Game Design Month (NaGa DeMon, for short) is here. To celebrate, many game designers volunteered to design, playtest, and play a game of their creation by the end of the month. Click the banner above for more information and feel free to join in on the fun! 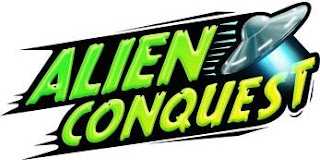 My choice for NaGa DeMon is to create a game based on one of my favorite recent LEGO® properties: Alien Conquest from 2011. It is all about green-skinned aliens descending to Earth in flying saucers to harvest the brains of human beings to power their spaceships. It is a fun mix of Mars Attacks and other B-Movie style science fiction motifs in a cartoony, modern setting.
The Alien invaders from Planet X2 1/2 are here to take our brains! A wide variety of bug-eyed bad guys (and gals) come in minifig form, complete with ray guns, flying saucers, and Pluuvian Brain-Beasts (the little one-eyed critters in the front). Who can defend us against this unstoppable menace?
The Alien Defense Unit (ADU) is Earth's only hope to fend off the invading aliens. Their team of soldiers, pilots, computer specialists, and scientists will find the invaders' weakness and send those creeps back where they came from!

Alien Conquest had an expansive product line but was short lived. A few of the recent Collectible Minifigures (such as Alien Villainess and Galaxy Patrol) seem to be part of the overall Alien Conquest storyline, but the main line is finished.

After picking up many sets from the series, I realized it had the makings of a great tactical miniatures game. Not your typical grognard slog-fest (that I would certainly enjoy) but a fast-paced, fun game with a lot of tactical decisions and the means to outmaneuver and outthink your opponent. I completed my collection of Alien Conquest sets*, read up on the established back story (such as there is one), and set out to design a new game.

Next update: what is the goal of the game?

Please note: LEGO® is a trademark of The LEGO Group of companies. This website is not affiliated, authorized, or sponsored by The LEGO Group. I do not claim to represent The LEGO Group and this game is completely my creation. While the project may use the LEGO® Alien Conquest world as a theme, any text about the game's mechanics are under my copyright.

* With the exception of the ADU Walker promotional set only available in the UK. Drat!
Posted by Tony at 10:45 PM