This piece took some work to "unearth" as it was left hidden behind a wall of text.

"After I started ADVENTURE GAMING Magazine, he did a couple pieces of art for me, and I did a cover story article on TITAN that he added and published some advanced rules in."

We discussed the first of the "couple pieces of art" in my last post, a vibrant, full-color painting of a scene from the world of Titan. As Titan co-creator, Trampier also wrote a two-page article titled, "Evolving Forces in TITAN." It provides an excellent analysis on how to compare creatures of slightly differing power levels and how to know when creatures become a liability instead of an asset.

The magazine also features two articles by Titan's other co-creator, Jason B. McAllister. "The History of TITAN" gives a thorough look at the development of the game, much more interesting than his "The Giver of the Law: TITAN Design Notes" article later published in Avalon Hill's The General magazine Vol. 20, No. 2. "The History" contains lots of details on game board design and simplification of unit stats that we game designers enjoy. "Waging TITAN: Tactics" serves as a good primer on both the tactics and strategies needed for this unusual game.

Note that none of the three articles contain any "advanced rules" that Kask mentions, above.

It is in McAllister's first article, "The History of TITAN," where we find Trampier's other piece of art, printed in light gray and hidden behind the text: 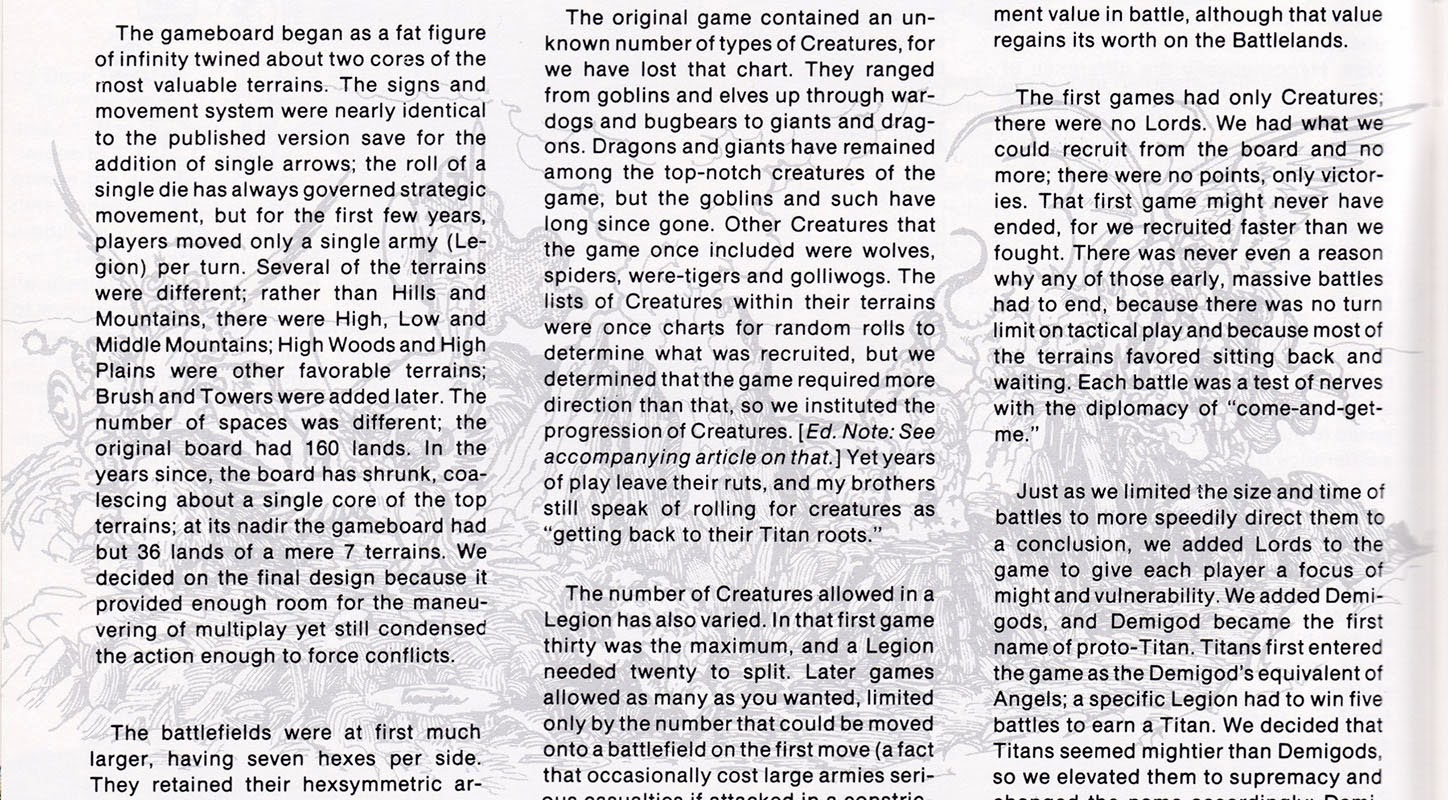 I could see what appeared to be a scene from the game with a titan, a minotaur and what appeared to be an angel hugging a dragon all on a volcanic landscape. Trampier's signature was clearly legible in the lower left, but not much else was. It might be a rough sketch for the cover image painting for this issue.

With a little bit of Photoshop wizardry, I removed all the text and worked to restore the image as best I could. I painted in some of the missing lines with my Wacom tablet. What I discovered surprised me: 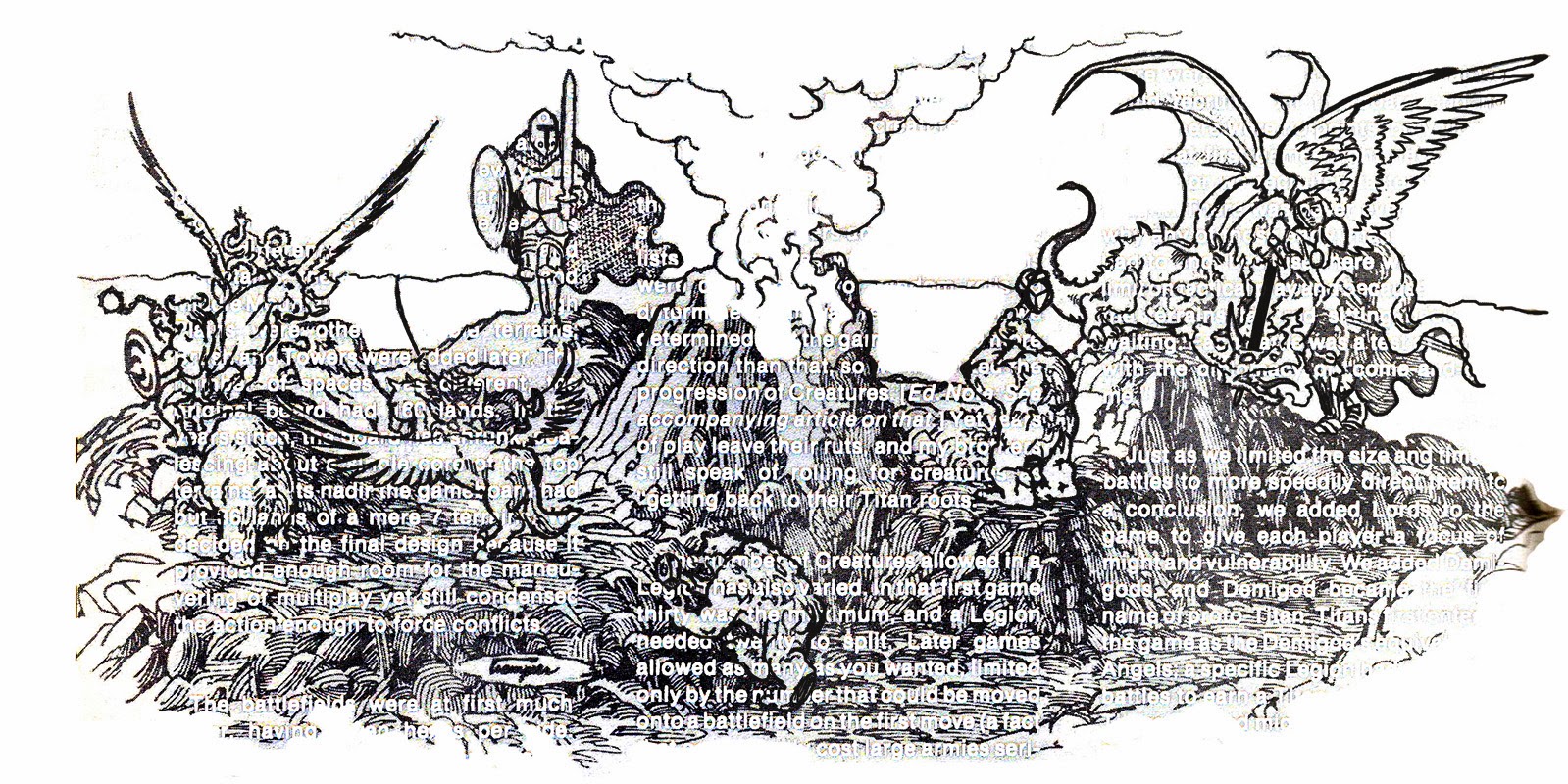 There are a lot of creatures in this scene! On the left, two rangers and a warbear surround a lone minotaur, who knocks one of ranger off his pegasus (in Titan, every ranger gets a pegasus. It's one of the perks of the job). A titan stands behind the volcano, avoiding combat (as often happens in the game. Two trolls with their iconic hammers are near the center of the image. On the right, an archangel is clearly not hugging that dragon so much as he is jabbing his greatsword through its head. I thought their relationship might be a lot friendlier. Ah well... 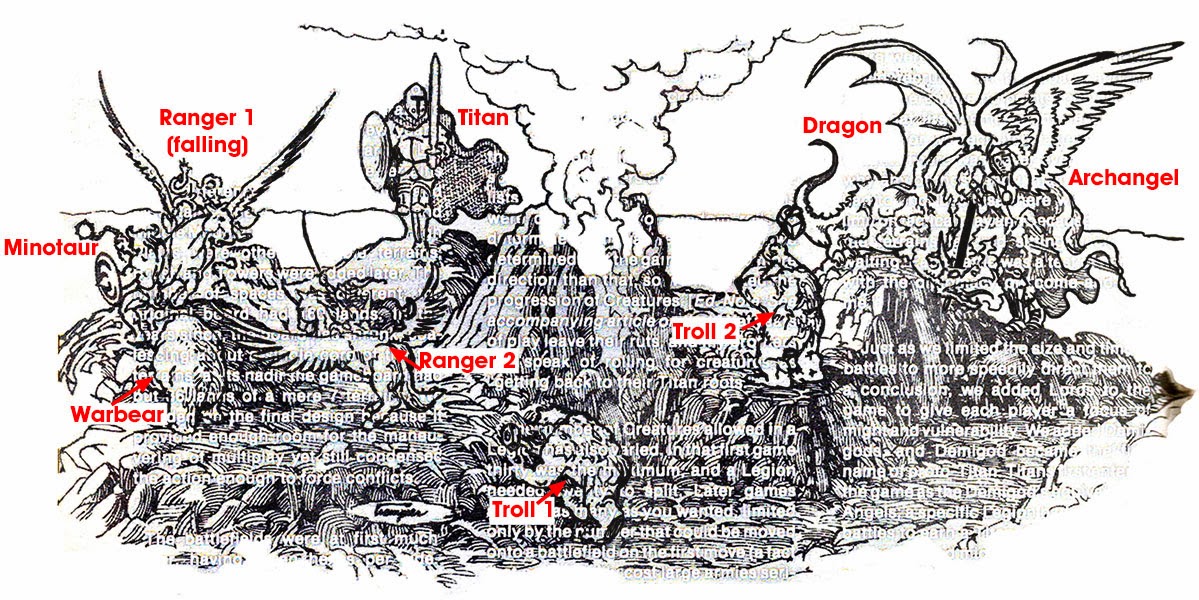 The scene is richly detailed and sometimes hard to read (those trolls tend to blend into the rock face). Above is a guide to the creatures in the image. There may be another creature as I think I see something between the two rangers. If you spot any more details, please let me know!

As far as I know, this drawing was never published anywhere else. Can anybody with the Gorgonstar publications of Titan and Battlelands of Titan confirm that it was not published in those games?

UPDATE - Reader Teacher, Trooper, Gamer, Dad (that is a long name!) helped me out by recognizing one more creature in this melee: a lion helping the minotaur strike down that poor ranger on the left.
That now puts the total at TEN Titan creatures, until now only probably only seen by a few people involved in the production of Titan and Adventure Gaming magazine. 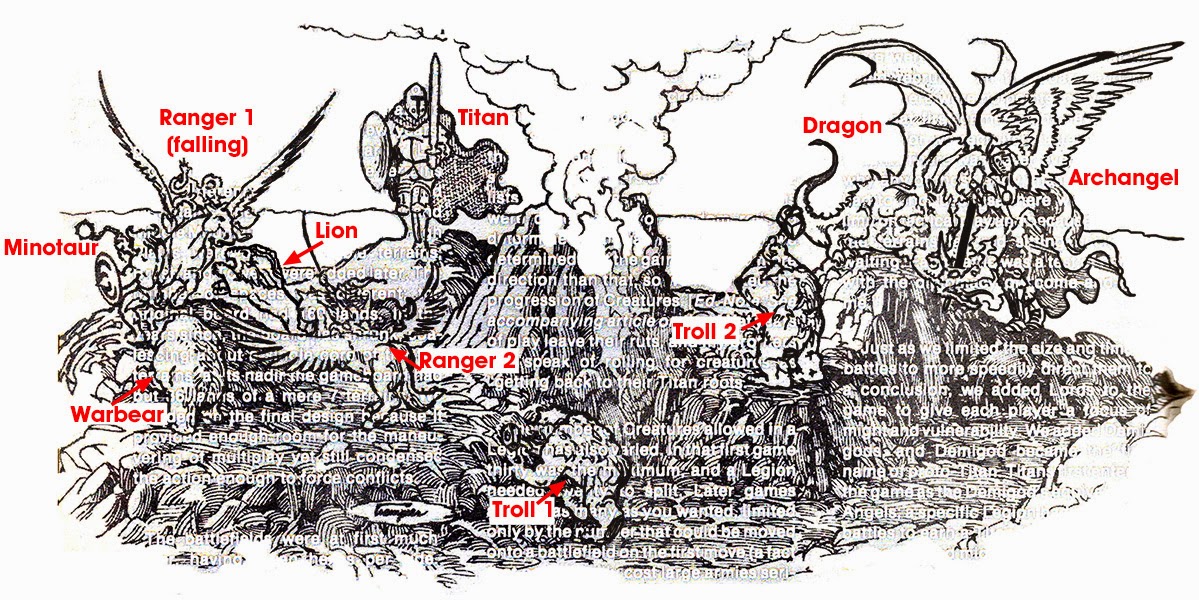