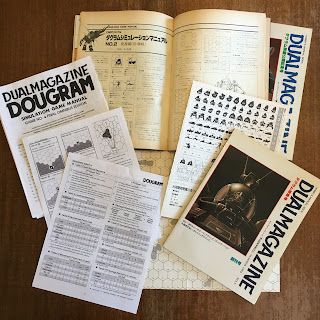 I've completed my English translation of the rules for Takara's Dougram Simulation Game Manual No. 4: Omnibus Edition, originally published in Dual Magazine issue no. 5.
First and foremost, here is the link to the download page hosted on BoardGameGeek.com. You need an account on the site in order to download the file, but if you are reading my blog, you probably already have one:
https://boardgamegeek.com/filepage/219911/dougram-simulation-game-manual-no-4-english-rule-b

Fang of the Sun Dougram wargame in a magazine

Takara's Dual Magazine published issues quarterly in the early 1980s with a "dual" focus on Takara's 2D (board games) and 3D (model kits) anime products. Many of Takara's products were licensed from Sunrise animation studio, such as Crusher Joe, Panzer World Galient, Ideon, Armored Trooper Votoms, and Fang of the Sun Dougram.
Starting with issue no. 2 in 1982, Dual Magazine began publishing hex-and-counter wargames, often called "simulation games" in Japan, in each issue. Each game could be played standalone, but would also add more rules, units, and game mechanics to the overall game system with each issue. The Dougram series of four games were published from 1982 to 1983. The first game introduced the basics of the system and a few units. The second game introduced desert combat, infantry, and transport units. The third game introduced combat in the snow and the fourth game is an omnibus edition that combines the rules of the previous three games. This fourth game is the one that I've translated and can be used as a rule book for any of the four games. 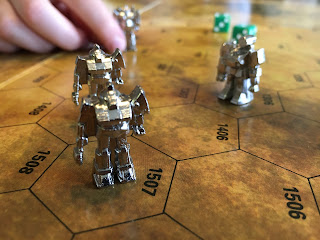 Instead of playing the game with the thin game boards and flimsy cardboard counters included with these near-thirty-year-old magazines, I opted to use some old Battletech game boards and miniatures figures from Takara's other Dougram board games: Battle of Stanrey (1984) and Battle of Kalnock (1985). These games were published a few years after the Dual Magazine series and use completely different rules, but the miniatures work perfectly.Battletech fans will recognize many Dougram mechs (or, "Combat Armors") as being the "unseen" mechs from the game's earliest editions: 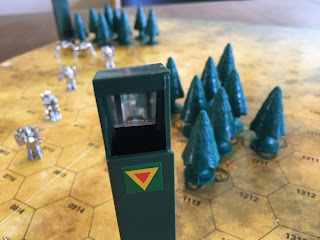 The two newer Dougram games use tree models and periscopes for determining line-of-sight checks. Place the periscope in the shooting unit's hex, then look through to see if the target is obscured by cover or not. It's a neat gimmick that can be applied to other miniatures games. Also, my kids thought it was really cool.

I enlisted my daughters to help me playtest the game rules that I translated before I published the new rule book. First, we used an open game board. My oldest daughter, as the heroic Deloyeran rebel forces, took the unique Dougram combat armor unit. I played the role of the corrupt Earth Federation with two Soltic Roundfacer units. I didn't stand a chance, as the Dougram's linear gun tore my armored units to shreds.
We chose a new board with light woods so that we could add some tree miniatures to the board.
The final game was a Deloyeran ambush on a convoy of Kolchima Special Roundfacers and two Crab Gunners in a thick forest. Mostly, this was so we could place ALL of our little trees on the game board (much to my daughters' delights).
This ended up being a disaster for the Deloyerans. It became clear that woods help the Earth Federation with their relatively short range weapons, compared to the longer range Deloyeran Dougram (with added Turbo-Zack system) and Iron Foot units. Even after I removed a Roundfacer when I realized our forces were unbalanced, it ended up being an unfair fight. Oops.

This is not a very complex game. Each combat unit is rated for Attack Strength, Armor Thickness, and Movement. Moving through difficult terrain, such as up hillsides or through woods, slows a unit down. To attack a unit, the target must be within the shooter's fire arc and there must be a clear line of sight between them. Count the range in hexes, then consult the unit type's hit chart to find the chance to hit on one six-sided die (-1 to hit chance if shooting unit is moving). If the shot hits, subtract the shot range and target Armor from the shooter's Attack Strength. Use this final, adjusted Attack Strength and roll on one of the two damage charts to see if the target is undamaged, loses its ability to move or attack, or is completely destroyed.
As mentioned earlier, there are additional rules for infantry units, transport units (to transport infantry or combat armors into battle), different terrain types, and rules for expert pilots. It is easy to come up with new variant rules and scenarios while watching episodes of the Fang of the Sun Dougram, TV show, where most of the action is skirmish-level mech combat. The rules are simple enough to easily handle a handful of units on each side but rich enough for tactical planning and decision making.
The Dougram Simulation Game Manual was designed by K. Otomo and Atsutoshi Okada, one of the most prolific Japanese simulation game designers of the 1980s (I've translated some of his other games and written about him before). Like many of Okada's other games, each side gets to attack twice per round, making for fast and frenetic battles and is an interesting variation on the "I go, you go" turn order concept:

All in all, it is a fun game that I will certainly continue to play. As a bonus, I now got my oldest daughter hooked on the Dougram anime and is insisting on watching the entire series. What could be better?
Posted by Tony at 3:06 PM