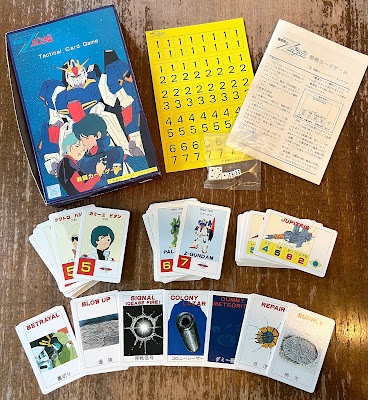 I've completed my unofficial English translation of the rules for Yanoman's Mobile Suit Z Gundam Tactical Card Game.
First and foremost, here is the link to the download page hosted on BoardGameGeek.com. You need an account on the site in order to download the file, but if you are reading my blog, you probably already have one:
https://boardgamegeek.com/filepage/245041/
Here is the link to the main game page on BoardGameGeek: https://boardgamegeek.com/boardgame/368787/

Yanoman is a Japanese company mostly known for publishing jigsaw puzzles, but they also publish tabletop games from time to time. This card game is licensed from the second Gundam TV series, Mobile Suit Z Gundam, which aired in Japan from 1985-86. There is no publication date on the game, but I presume it was published while the show was still on the air.
The game was designed by Atsutoshi Okada, one of the most prolific Japanese simulation game designers of the 1980s (I've translated some of his other games and written about him before). This card game is much simpler and plays faster than his innovative hex-and-counter wargames, as expected. There is still some variety, like how Ship combat and MS combat uses the same general die-rolling mechanic, yet work differently. Also, not knowing what cards your opponent may be holding adds unpredictability missing in perfect information games, like most wargames (though Okada adds hidden information into some of his other games, such as Endor).
Each player is dealt a starting hand of 4 Ship Cards (3 Ship Cards in a 5-6 player game) and 8 Special Cards (a random assortment of MS Cards, Pilot Cards, and Event Cards) to assemble their starting fleet.
On their turn, a player draws a Special Card and then may make an attack with an MS or Ship in their fleet, they may put an MS and Pilot Card pair from their hand into their fleet, play an Event Card, or discard a card from their hand.
* Game end conditions may vary and are decided upon by the player before the game starts. Any of the following are valid game end conditions depending on the number of players, the time frame available, or just the preferences of the players:
Players then tally up their victory points based on the enemy MS, Pilot, and Ship Cards they destroyed in combat.

In the test game shown here, the right player destroyed all of the left player's Ships, triggering the end of the game. The left player's forces had been whittled down after several turns of attacks before the right player played a Colony Lazar, wiping out the last of the left player's Ship fleet.
Unfortunately, luck played an extremely strong factor in determining who wins or loses. In the sample game photographed above, the right player wound up with several of the most powerful MS and Pilots in the game, just by the luck of the draw. The left player simply couldn't compete, drawing several low to mid-tier MS and Pilots.
One unusual aspect to the game is that each Ship, MS, and Pilot card has a faction affiliation (Titans, AEUG, Zeon, etc.) but they aren't used in the game at all. Players are free to mix and match units from opposing factions. I can see a scenario-based battle, maybe where each player has their own faction deck to draw from, might be designed to make for a better balanced game or one that better replicates one of the battles seen in the TV series.
Posted by Tony at 10:43 AM