I've completed my English translation of the rules for Takara's Votoms Simulation Game Manual, covering the complete rules set to allow one to play games no. 1 through 5. These games were originally published in Japanese as articles in Dual Magazine issues no. 6 through 10.
First and foremost, here is the link to the download page hosted on BoardGameGeek.com. You need an account on the site in order to download the file, but if you are reading my blog, you probably already have one:
https://boardgamegeek.com/filepage/245358/votoms-simulation-game-manual-english-rule-book

Takara's Dual Magazine published issues quarterly in the early 1980s with a "dual" focus on Takara's 2D (board games) and 3D (model kits) anime products. Many of Takara's products were licensed from Sunrise animation studio, such as Crusher Joe, Panzer World Galient, Ideon, Armored Trooper Votoms, and Fang of the Sun Dougram.
Starting with issue no. 2 in 1982, Dual Magazine began publishing hex-and-counter wargames, often called "simulation games" in Japan, in each issue. Each game could be played standalone, but would also add more rules, units, and game mechanics to the overall game system with each issue. The Votoms series of five games were published from 1983 to 1984. Different games covered different terrain, from urban fighting in the city of Uoodo (sometimes spelled Woodo) to the marshy wetlands of Kummen to outer space battles in orbit around the deadworld Sunsa.

Since the games were published in magazines nearly thirty years ago, the main components are printed on thin cardstock. I'd rather not watch all the game components blow away if I sneezed too hard, so I decided that the game needed an upgrade.
I opted to use some old Battletech game boards and miniatures figures from Takara's other Votoms board game: Plotters City Woodo. This game in development while the Dual Magazine game series was published and uses completely different rules, but the miniatures work perfectly.
If you've read my blog for a while, this post may sound familiar to you. That's because I did the exact same thing when I translated the earlier Dougram Simulation Game Manual series and posted about it here! 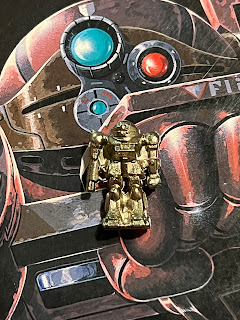 I started with a simple test scenario, based on the recommended scenario in the first game. Two Armored Trooper (AT) units face off against each other in combat. I chose two Scopedogs and gave one a shoulder-mounted rocket pod and the other a machine gun. Both units had pistols as secondary weapons (and it is not a bad weapon in this game!).
This game is fairly complex - much more complex than the earlier Dougram games in this series. While it was easy to manage a handful of "Combat Armor" mecha in Dougram, these Votoms rules presumed that each player would usually manage only "Armored Trooper" at a time.
The player starts by choosing an "Action Pattern" for the unit in secret. This is a clever design, first developed by designer Atsutoshi Okada for use in the Tsukuda Hobby game Macross: City Fight (1983). The action pattern defines a certain "behavior" for the unit to take during the turn, such as running, walking, zooming around on roller wheels (think mecha on roller skates), or concentrating on shooting a weapon or engaging in hand-to-hand combat. This chosen action pattern defines how the unit may move, shoot, fight, and dodge incoming weapons for this turn. Like, running doesn't stop a unit from firing a machine gun in the same turn, but your accuracy is going to suffer.
Next the player secretly plots the exact movement the unit will make, what type of camera lens the mecha is using (lenses are a whole thing in Votoms - you must choose between standard, telephoto, or wide angle), and how many shots you plan to fire from a weapon (if any).
During the movement phase, all units are moved simultaneously, based on their secret movement plots. This can be a real surprise as the enemy can and will move wherever you least expect it to. Trying to outguess the opponent's moves adds a level of tension and unpredictability not seen in simpler games, at the cost of added complexity.
Last is combat, including shooting and hand-to-hand "battling." Even if you didn't plan to have a valid target this turn, your unit can always shoot one snap shot off if you have line of sight on an enemy. 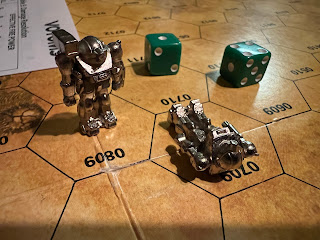 In my first test game, both units cautiously maneuvered around the dense patches of forestland between them for two turns. On the third turn, both were ready to approach within weapon range. The machine gunner ran at full tilt, attempting to outflank the opponent and blast them in their blind side. However, the rocket pod AT didn't advance very far and had readied a volley from their short-range pistol.
The units were only one hex distant, and both were in each other's front arcs. The machine gunner unleashed a burst of 5 shots, but only 1 hit its target. The rocket pod AT fired 4 shots with its pistol, which is less powerful than the machine gun but highly accurate at this range. 3 shots ripped through the machine gunners armor, destroying the mech. The pilot did not escape the wreckage.

This is a surprisingly complex game, especially for the anime fans reading this magazine and maybe starting out with their first board wargame ("simulation game," as they are called in Japan). Designer K. Otomo bemoans this problem in some of his designer's notes in the series, all of which I have translated and included in the rule book.
Much of the complexity comes from plotting one's moves in secret and having a rich choice of actions and equipment that closely resemble battles in the Armored Trooper Votoms anime. If the players are patient and experienced gamers, this pays off with an exciting game that is true to its source material.
However, just shooting a target can make my head spin. It is simple enough on paper, but breaks every intuitive notion when I try to figure out what number I need to roll to hit. First, each weapon has a certain hit chance at short, medium, or long range. This is the number you attempt to roll less than or equal to on two dice in order to hit the target (for example, at range 5, a machine gun has a base hit chance of 8).
Then, there are so many possible combat modifiers affecting your chance to hit:
But what doesn't makes sense is that these are modifiers to the dice roll not the hit chance! That means that negative numbers are bonuses and positive numbers are maluses, which is never intuitive. Also, if you want to figure out your hit chance, then you must subtract your modifier total from the hit chance to figure out what you must roll on two dice.
It just seems like it would all be more logical if all negative modifiers were positive and vice versa, then you added the modifier total to the hit chance and immediately know what number to roll. It may not seem like much, but it would help streamline something you do a lot of in this game.
Posted by Tony at 10:13 PM