Recently, Jason Zavoda used his Hall of the Mountain King blog to start an in-depth look at the characters in Dave Trampier's comic strip, Wormy. Since Tramp is a subject of study for me, I've revived my oft-abandoned blog to discuss some of his lesser-known art pieces.

In 1977, sometime around his 23nd birthday, David A. Trampier became one of the early artists working for TSR illustrating Dungeons & Dragons and other games. He created some of the most iconic illustrations in D&D. His influence is still felt in countless homages across the role playing industry. 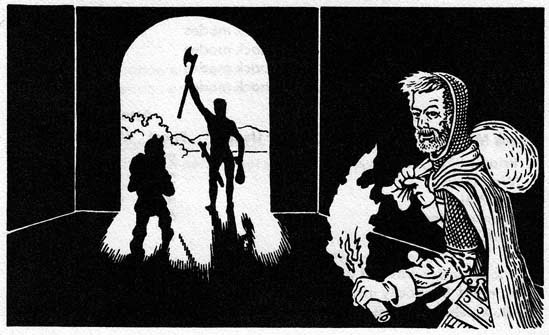 Trampier's grizzled, bearded face and 6' 3" frame often appears in his own illustrations, such as the above piece of three successful adventurers from AD&D's Players Handbook. Even Trampier's monstrous manticore face feels like a self-portrait.

Around 1981 or so, Trampier's work disappeared from TSR games but his Wormy comic continued to appear in TSR Periodicals' Dragon magazine. 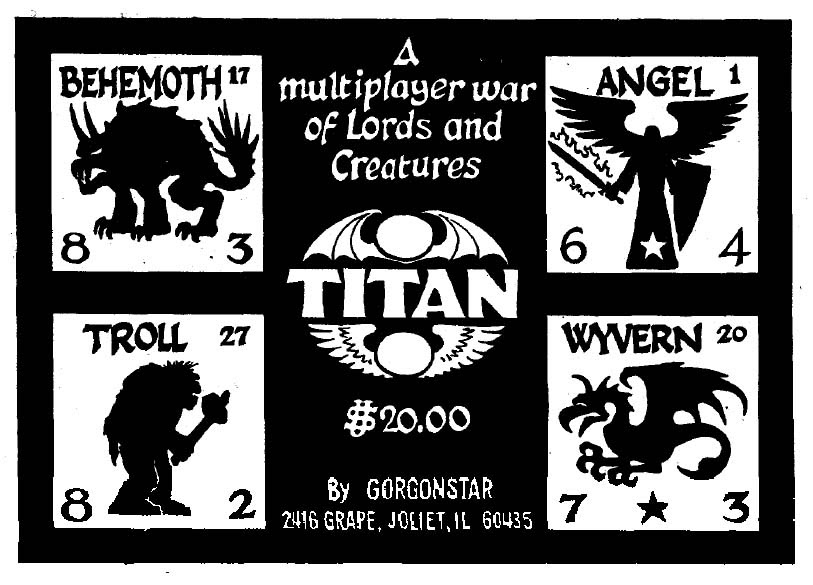 With co-designer Jason B. McAllister, Trampier self-published the fantasy "Monster Slugathon" board game Titan under the name Gorgonstar Publications in 1980. Tramp created all the artwork for the game box, board, components, rulebook and advertising. 1981's expansion Battlelands of Titan added new features to be incorporated into all future printings of the base game. The game eventually became a hit, one of the seminal fantasy board games of the 1980s. 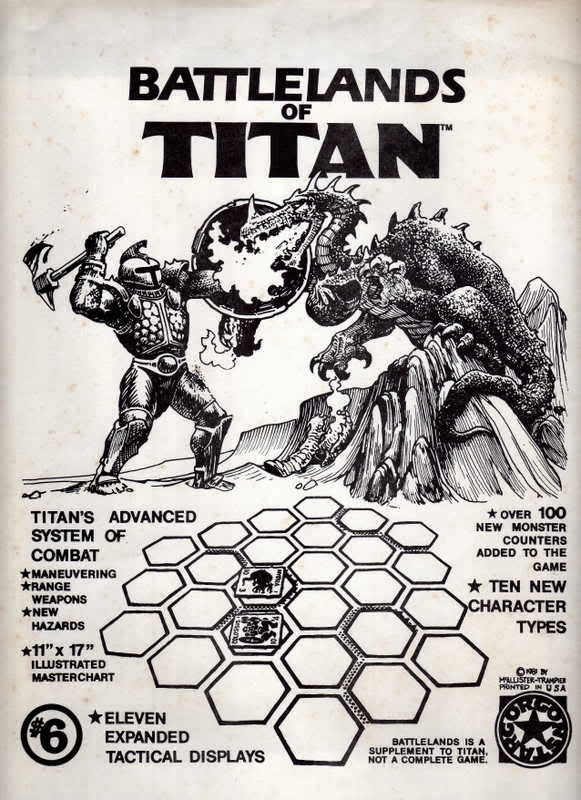 Supposedly, TSR was given first crack at publishing the game but refused. In 1982, Avalon Hill published the game as part of their Bookcase Game series. Strangely, the box cover featured art by Avalon Hill's Kenneth Nishiuye. Nishiuye's purple painting of a titan, unicorn and dragon was functional and iconic but ran counter to Trampier's distinctive style seen on the game components. I'll discuss more about a possible Trampier Titan cover in the next post. 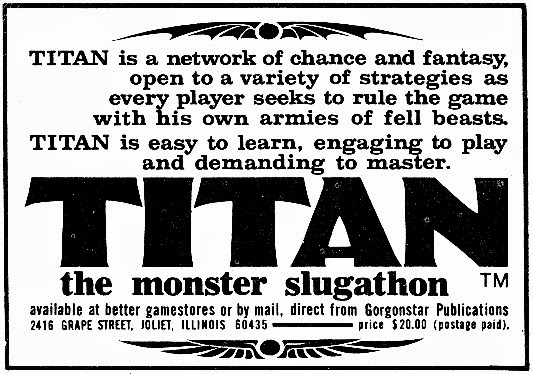 Titan remains a classic and was republished in numerous forms. Avalon Hill licensed the game to Hobby Japan who released a computer game version as Beast Lord in 1991 followed by a sequel in 1992.  In 2008, Valley Games, Inc. created a high-quality reprint with an iPad edtion appearing three years later. A German edtion appeared in 2012. It is unknown if Trampier continues to profit from these reprints. 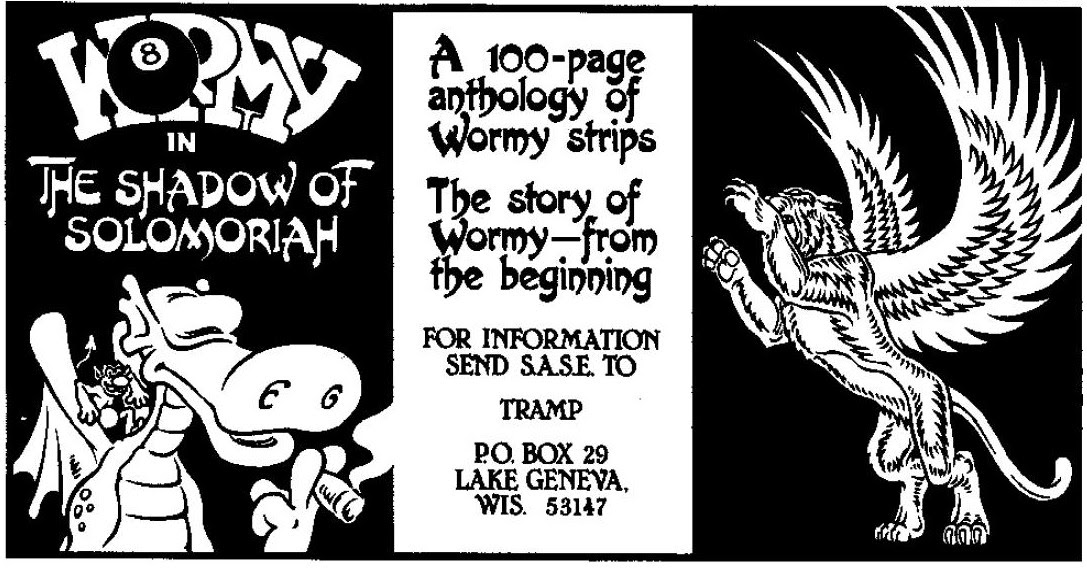 Tramp started worked for TSR Periodicals in 1977, illustrating Dragon and Little Wars magazines. Dragon started publishing his Wormy comic strip about a cigar-chomping, snooker-hustling, wargaming dragon and the strange being that inhabit his world. Much like Cerebus the Aardvark years later, Wormy began as something of a "funny animal" comic, a parody of gamers just as Cerebus parodied the Sword & Sorcery genre. Wormy's story matured over the years as Trampier's skills as artist and storyteller improved significantly, much like Dave Sim with Cerebus. Unlike Cerebus,* Wormy continued to be funny. It remained a parody of the very gamers flipping to the back of each new Dragon magazine to read the latest installment.


Sadly, Wormy's second storyline was abruptly truncated in 1988. A cryptic announcement informed us that Wormy would no longer appear in Dragon. Trampier's brother-in-law, game designer Tom Wham, had no contact with him since 1982. Trampier seemingly fell off the face of the Earth, leaving fans to wonder what happened to the artist who was an influence on so many. 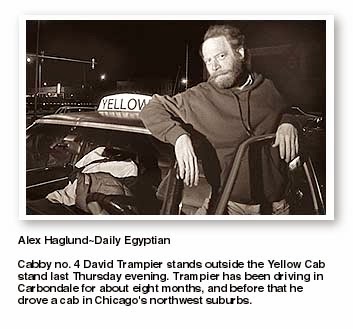 In 2002, amid rumors of his death, it turned out he was working as a cab driver in Illinois. The Daily Egyptian, a Southern Illinois University newspaper, posted a short piece about the life of a cab driver in Carbondale named David Trampier. There was that grizzled, bearded face last seen peering out from behind a shield on the AD&D Dungeon Masters Screen. TSR insiders confirmed that this was the very same David Trampier.

For whatever reason, he wanted to be left alone and get away from art and the gaming industry. Attempts to contact him about his art were politely declined.


Over the next several posts, I will examine some of the lesser-known Trampier works. The illustrations from the Monster Manual and Deities & Demigods are all well-known. Jason Zavoda is doing an admiral job at exploring the art from Dragon magazine. I will share the rarer, published pieces I've discovered along with any pertinent information I know about them.


* I am quite a fan of Cerebus and read each and every issue (yes, even the prose with almost no illustrations, even when it seemed like he'd never get out of that bar). I admire Dave Sim's ability to self-publish and do what he wants with his creator's rights. Lord Julius remains one of the best interpretations of Groucho Marx I've ever seen (take that, M*A*S*H-era Alan Alda). I just wish Wormy had a chance to see a 6000 page storyline published, like Cerebus did. Who knows, It could've degenerated into a misogynistic diatribe with Wormy worshipping an amalgam of the Abrahamic religions at the end.
Posted by Tony at 10:03 PM