I've been focused on studying gaming books from the earliest era of role-playing: anything before 1981, by my reckoning. My most recent acquisition was two related adventures published by Dimension Six, Inc. 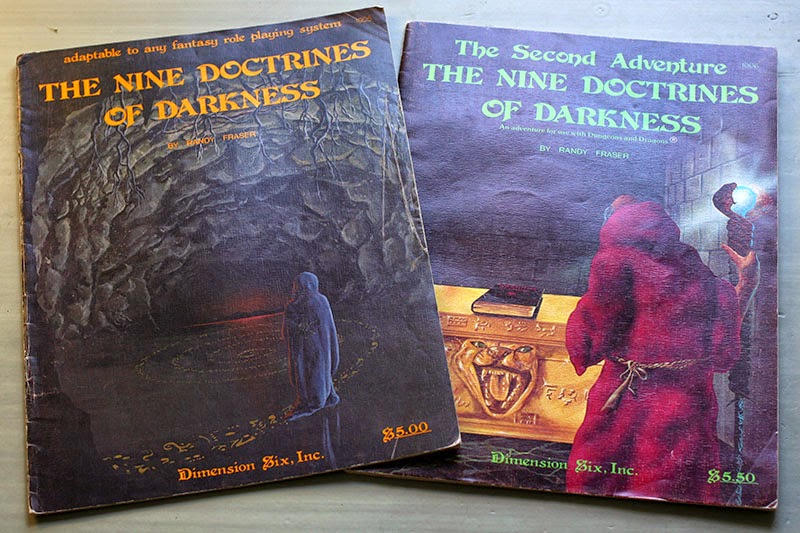 The Nine Doctrines of Darkness and The Nine Doctrines of Darkness: The Second Adventure were both written by Randy Fraser and published in 1980 and 1981, respectively. These appear to be designer's only contributions to the hobby. I knew of publisher Dimension Six from their marginally useful Compleat Fantasist book of tables to translate characters from one game to another.

Each adventure focuses on recovering one of the nine titular doctrines of darkness, a set of evil artifact tomes detailing the nine principles that uphold all Evil (that's capital-E evil) as written by Lord Erlich, and Evil Arch Mage, before he perished in his final evil destruction brought on by the evil knowledge of perfect evil. Before collapsing evilly onto the floor, he polymorphed each doctrine into an ordinary object and scattered them around the world. Now, the polymorph spells are wearing off and the elf king's favorite wineskin just turned into a powerful, evil grimoire of evil evil evil.

Why a party would undertake these adventures depends on its alignment. Good characters must prevent the Doctrines from falling into the wrong hands. Evil characters are those wrong hands who want to use the powers of the Doctrines. The first adventure plays very differently due to this duality of interests. A non-evil party comes to the elf king's side to help protect him from every evil-doer looking to claim the Doctrine. An evil party assaults the elf king's castle and steal the book for themselves.

These adventures must have been created for evil parties. It is much more fun to assault or infiltrate the good castle than to patrol the forest kingdom fighting random encounters. The second adventure is loaded with awesome magic items that non-evil characters can't touch without, at best, suffering damage. The lone +3 holy sword doesn't compare to the evil staff that shoots 20d6 lightning bolts (among other powers). Good characters can't even destroy the books as, "no efforts either magical or physical can harm the Doctrine in any way."

The first adventure is short, sparsely detailed and luridly illustrated. There are some odd new monsters (Shammy: a red-furred gorilla wielding a huge axe). The second adventure is about thirteen pages longer than the first and includes some decent room illustrations to be shown to the players (much like S1 Tomb of Horrors). In addition to some wilderness adventuring (complete with some decent hooks for further adventuring) it has a thoroughly detailed, three-level temple complex to explore. This is more of a typical dungeon delve. There are some good tricks, traps and challenges but, like many adventures of the day, it misses details that give the temple the feel of a functioning place. For example, there are guard rooms filled with ninja guards (!) and umber hulks (!!) near the front door but nobody is posted to guard duty.

Since only the first two adventures were published, it begs the question, "what happened to the other seven Doctrines of Darkness?" We may never know, but I know that Catacomb Librarian was subjecting his gaming group to these adventures recently. Whatever became of them? Cat. Lib. also found an old review of the first adventure by Aaron Allston (R.I.P.).
Posted by Tony at 4:22 PM