My oldest RPG might be a controversial choice - "Proto RPG" is a better term. This predates 1974's release of Dungeons & Dragons and 1971's Chainmail. It is older than the first Braunstein game played in 1967, direct inspiration for Dave Arneson's Blackmoor.

When this game was released, The Milton Berle Show was still on the air and the Apollo Program was yet to launch its first, fateful mission.


This is Michael F. Korns' 1966 game Modern War in Miniature (MWIM), probably self-published by Korns and a partner in Kansas under "M & J Research Co." I believe the rules are still available in reprint as part of the book More Wargaming Pioneers from The History of Wargaming Project. 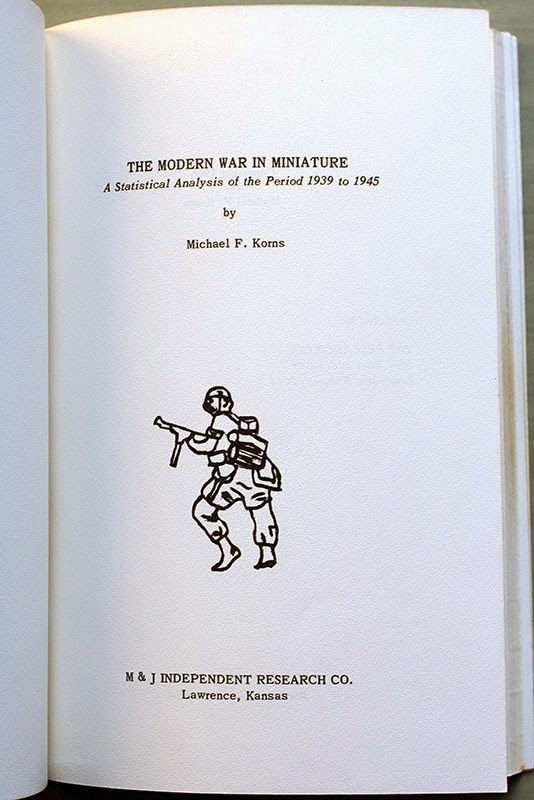 MWIM is an unusual WWII, skirmish-level wargame. As normal, two players act as commanders (one Allied, one Axis), directing their combat units in battle. Miniatures are moved across the terrain on a sand table. What is unusual is that a Judge mediates all actions and is the only one with full access to the sand table. The judge is the only one who needs to know the rules and randomly determines the outcomes of all actions. He talks to the Allied and Axis players individually, out of earshot of each other, describing what they can see and hear in 2-second segments of time. It sort of takes the adversarial roles and judge's mediations of a Braunstein game into short time-span, tactical turns. Everything is on a personal scale making it different from a typical wargame.

The above example of gameplay shows that the player is expected to embrace their role and step into the boots of the commanding officer. This reads much like samples of gameplay in many RPGs, with the players stating what "I" do in the situation to the GM. Only the adversarial rather than cooperative roles of the players are different.

Note that any TEXT IN ALL-CAPS is said loud enough for both players to hear. "Schmeisser" is used here as a colloquial term for a German MP38 or MP40 sub-machine gun (which always annoyed me since they were designed by Heinrich Vollmer, not Hugo Schmeisser).

How do you generate random percentile or fractional results without percentile dice? This chart, a subject of discussion on Jon Peterson's Playing at the World blog, shows how to use a 2d6 result for rough percentages. As Peterson mentions, Mike Carr adapted this chart for use in the 1972 edition his game Fight in the Skies (it is titled "Percentage Index" in my 6th edition TSR rules). This shows that the gamers in the Twin Cities of Minnesota were aware of MWIM.

Modern War in Miniature eventually developed into Small Unit Tactical Combat (SUTC) in 1971. Above, you see my 2nd edition Referee's Rule Book from 1972. Several other SUTC products were released  published by "The Limpex Company" of Mountain View, CA. From what I could gather, Korns lived and gamed there during that time. Coincidentally, I moved to that area in 2005.

SUTC is very similar to its MWIM predecessor. Gone is the chart of simulating random percentile results with 2d6; now there is a chart of random two-digit numbers for the referee to pick from. It appears that this alternate evolutionary line of gaming died out after SUTC. I can't find any games that Korns published after that.

Was MWIM an influence on Gary Gygax? Probably not for Dungeons & Dragons, but according to Peterson, it did insppire Leon Tucker, Gygax's and Mike Reese's co-designer in the development of Tractics.
Posted by Tony at 2:41 PM